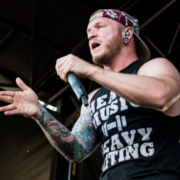 Post-hardcore band, We Came as Romans are taking over Empire Control Room & Garage this summer on Tuesday, August 4th as part of their To Plant a Seed 10 Year Anniversary Tour. Joining them will be metalcore bands The Devil Wears Prada, Gideon and Dayseeker. Doors to the venue open at 7:00 pm and the first band will light the stage up an hour later at 8. The show is for all ages with a $5 surcharge for minors and general admission tickets are going for $27 and trust me, you don’t want to miss this one.

We Came as Romans formed in Troy, Michigan in 2005 and have undergone multiple lineup changes over the years but their message has always remained clear – to overcome your demons and rise above them. The band released their debut album To Plant a Seed in 2009 and continued to create refreshing danceable metalcore with melodic undertones. Contrary to most bands of the genre, We Came as Romans channel emotions of deeper consciousness with lyrics that promote hopefulness during the darkest of times. With their unique approach, they have made their way to becoming one of the most enduring hardcore bands of our time.

After the tragic death of vocalist and keyboardist Kyle Pavone in 2018, We Came as Romans came to the decision to move forward as a band but had no interest in replacing Pavone. It’s been an extremely difficult time for the band after losing a good friend and fellow bandmate as we can all imagine. However, as they work on a new album, they are taking the time to put much thought and care into every aspect of it so patience from the fans will be very rewarding. Currently, they are getting ready for their 2020 tour in which they will play To Plant a Seed in its entirety and as they continue to carry on, they want to put out music that displays hope and gratitude in the memory of their fallen friend, and they are already fulfilling that desire.

Come support and embrace the music of We Came as Romans and other great names in post-hardcore at Empire this August!